Yes, indeed. This was my first line when I started programming in php a few years ago. Today, however, I don't have much time for messing around with php and the like: I have a vision, a dream, an upcoming project.

I want to make a roguelike set in the bronze age. You start out as a Nobody, maybe even a complete stranger to the lands. There is wilderness everywhere with many dangers and you need to survive. You can join or set up an own settlement, take up a profession and do your work. Learn skills with a dynamic skill system I came up with, use them to prove you are worthy. Furthermore- and here it should start getting interesting- you can become priest. Learn how to interpret nature's signs, forecast weather and perform rituals and get people to believe you. You can even order the construction of a temple so huge that it will take many, many years to build and hundreds of slaves to get the resources. The game will be hard and demand much patience. For example, I want an absolutely realistic inventory system, a bit like the one in Cataclysm, but more restrictive. Then, I want fights to become very realistic. Many fights will be decided due to fatigue and endurance but there will not be an usual health point system (at least not visible for the player). A nice pierce to the stomach of an opponent (or your own) will end a fight soon enough. This gives me more possibility to concentrate on a very well written action text. Last but not least, I will make sure that there is a big amount of dependance on NPCs, either for hauling, fighting, hunting or general living. This needs very much writing and detailed behaviour trees.

My most important message for this game is the following: You just can't do everything with one character.

Learning is very slow, it will take not only quantity, but also time, maybe even lessons from NPCs. Working tools are very primitive. EVERYTHING is primitive, because we are in the bronze age. Traveling around the lands is very dangerous and takes much time. People will hate you for not knowing you. You can only haul as much as you can lift. etc. etc... . Resources are very scarce, there are different geographical regions (try to find huge trees or even drinkable water along a beach). Of course I will not just go after my fantasy. I will do lots of research, talk with people who study history, read books etc.

Yes, that's it. After having been a player of Unreal World, a - lets call it roguelike- set in the iron age in Finland there was something in me that wanted to create some amazing stuff. Reading Bernard Cornwell's Stonehenge, I couldn't hold it back: I started learning Java right away.

After I started learning php two years ago, I tried out many different gaming approaches to websites, many of them condemned to fail due to bigger projects coming up. I even followed the "Complete Roguelike Tutorial, using python+libtcod" on roguebasin and ended up not knowing where to go. Right after the tutorial I wanted to make the game real-time, with lots of projectile drawings. But I failed. I lost interest in it. I didn't like python too much.

Due to my Intermedia Design studies in Trier (Germany) I started working on an other project in processing (very similiar to java, but easier) about bacteria and some environmental behaviour. I first was trailing around some examples from the net, then I started writing my own code, my own methods and they worked. Probably most of you who read this have long-time experience with programming. Well, I don't. And this made me happy.

Then, recently I had this vision during the lecture of "Stonehenge". I need to make an overly complex game with persistent world. I do know that this is the kind of games that never will see light, but I think this idea will be following for years to come so I said: "Hey you are still young(23 as of today), you have plenty of time to work on it."

My first step was to follow another tutorial for writing roguelikes in Java. That was on Trystan's blog, and it really helped me getting into that language (so, if you are reading this, thank you very much). I went through the whole tutorial, then I wanted to do things on my own. I was caught in a dead end again. I didn't want to keep the same Design structure that I learnt from the tutorial because it felt like I was stealing ideas. I started reading forum posts and articles about algorithms (especially world-gen) and about writing techniques in general. I looked around for different open-source projects and could say that whatever I learnt from Trystan's tutorials was almost always the more elegant solution, especially concerning the display and screen techniques.

Now I am here: I was going through the whole steps again and started going off from the original code as much as I could, while keeping the game runnable. But there are still so many things I can't think about how to do. Just today, I spent at least 4 hours reading how to write a save file, spent 2 hours to write it and get it working only to see that it was impossible for me to load it back again. Damn it...!!! 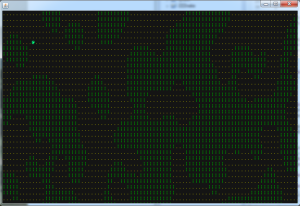 But I won't give up. Even if it takes much time, I will keep learning and writing and some day, eventually, my game will become reality.